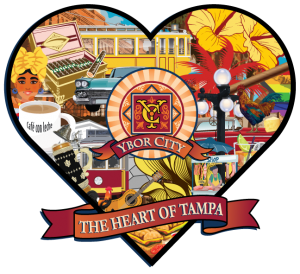 TAMPA, Fla. (Nov. 20, 2020) – Historic Ybor City, also known as America’s Neighborhood, is launching a new campaign to celebrate its strong history, diversity, and collective economic impact to the area. As the Heart of Tampa, Historic Ybor City is the essence of Tampa – from the culture to the new businesses that reach success and thrive off of the diversity.

Amidst the challenges of a global pandemic, many great things happened in Ybor City – the opening of Hotel Haya; construction and opening of the new Sicilian restaurant Casa Santo Stefano; and the growth of the Flan Factory from the Ybor Saturday Market to a brick-and-mortar location. Additionally, new housing options opened, such as the luxury apartment community, Lector 85.

“Our District, understandably, has been fairly quiet the past few months, nonetheless, there was a lot happening under the surface. We have so much going on and a lot to offer, whether it’s for people visiting or for new businesses interested in opening in the District,” said Courtney Orr, Manager of the Ybor City Development Corporation.

Ybor City businesses are resuscitating from tough times and the Heart of Tampa campaign offers an opportunity for them to share their continued belief in Ybor. As part of the launch, businesses in the District will be provided Heart of Tampa window clings to exhibit their support of the optimistic pulse of the area.

“For my wife and I, becoming a part of the close-knit community that is the heart of Ybor City has been so rewarding,” said Chris Wojtowicz, Chairman of the Ybor City Development Corporation. “From the iconic sights of the sunset splitting the buildings on 7th Avenue and the classic streetcar, to the sounds of our colorful roosters and the vibrant nightlife, to the smells coming from dozens of family-run restaurants and cigar bars, Ybor City and its people envelope you in history, excitement, and fun!”

Additional efforts underway include street banners leading up to Seventh Avenue and a digital toolkit on YborCityOnline.com/HeartofTampa with Heart of Tampa phone and desktop backgrounds.

About Ybor City Development Corporation
Ybor City, Tampa’s National Historic Landmark District, has a unique background and diverse cultural heritage. The district is flourishing with culturally inspired architectural buildings and an eclectic mix of businesses and restaurants. Over the past 20 years, the district has undergone significant economic development and investment while also maintaining its historic charm. Ybor City Development Corporation (YCDC) works to stabilize the district by securing the future of its historic structures and community.In addition, it serves as a catalyst in rehabilitating deteriorated properties with architectural merit, creating jobs, and improving the district’s overall livability. Its mission is to enhance Ybor City’s development, redevelopment and economic revitalization. For more information about YCDC, visit www.yborcityonline.com.